Published in Madrid on 6 October 2008

Although graffiti and street art are different games, with different practitioners and audiences, both are often perceived by the general public as parts of the same thing. This text looks at the earliest cases in both currents to investigate the aspects that define and separate them, and also offers a brief introduction to the illegal street work that founded the career of French artist Daniel Buren.

Some days ago, I received in the mail the book Golden Boy as Anthony Cool, published in New York in 1972. It is a brief look into the graffiti made by the children in working-class areas of New York at the precise moment when it was starting to take the shape that would eventually give way to the New York graffiti culture, the one now spread worldwide.

Indeed, this culture started as a systematised version of children’s graffiti, that ancient custom by which children write their names and other things on walls. During the second half of the sixties, the practice of this tradition gained unprecedented intensity among the children and teens of Philadelphia and New York, helped by the recent introduction of spray paint and as a reflection of several forms of public writing that abounded in that place and time: political inscriptions, territorial markings of street gangs and, of course, outdoor advertising. 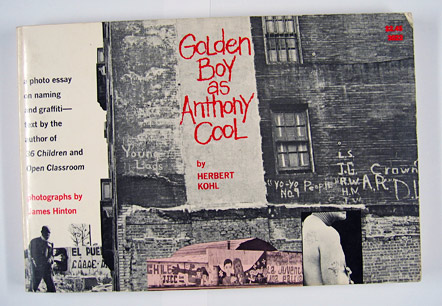 In the spring of 1968, Julio 204 carried out the first prominent case of the propagation of a name across a whole neighbourhood. Inspired by his example, others began to reach further. When names started to be written beyond the bounds of the writer’s neighbourhood, graffiti, as we know it today, had appeared.

It is the all-city concept, to reach all of the city, the core idea of the movement that would end up covering the landscape of New York with names. The subway soon became the favourite target: on the sides of the subway cars, along the elevated tracks across neighbourhoods, the names paraded in front of millions of eyes, from one end of the city to the other. From 1971 on, the phenomenon exploded.

There were soon thousands of writers competing for visibility, to appear more often than their competitors, to get up more. The need to make the names stand out in a saturated space resulted, first, in a progressive stylisation of the signatures, soon illegible to the layman, and second, in an evolution in scale that turned initially modest inscriptions into huge multicolour letterings the size of a subway car.

In a few years a complex culture developed, and by 1973 almost every stylistic and methodological convention that defines graffiti as it is still practised in New York and the rest of the world – to where it was exported quite literally – was already established. The game of graffiti has perfectly defined rules, which progress quite slowly. The goal is to gain the respect of the rest of the practitioners, and to get there one has to appear more often, on more hazardous and visible spots, and showing the best style.

The concept of style is particularly important. More than to any calligraphic or painting skills, style refers to the freshness and originality with which the narrow graphic vocabulary of graffiti is reinterpreted. Methodology is also determined by rules, from the acquiring of the tools to the choosing of the locations. Although it might appear otherwise, graffiti is a conservative culture, focused on the repetition of its own traditions, where creativity is appreciated only up to a certain point.

This results in a game in which the pedestrian is not at all taken into account as a potential audience. Graffiti is a closed code, aimed exclusively at its specialised audience. Only graffiti writers, as the practitioners call themselves, can appreciate the merits and nuances in the work of another writer, from his style to his methodology.

This is the line between graffiti and street art: street art is a game in which the pedestrian is invited to participate

This is the idea that draws the line between graffiti and street art: street art is a game in which the pedestrian is invited to participate. Some examples we’ve talked about are Invader and Eltono, two artists that also play the game of getting up all-city, only in a way we can all understand. What they repeat is not an illegible name, but a recognisable image that any pedestrian can identify with.

The impulse of getting up does not originate in this case from an inside competition between artists. Instead, it is part of the relationship between artist and viewer that constitutes the aesthetic experience of this type of art: the artist reproduces his images, the viewer is surprised in every encounter and appreciates the way the artist’s work reacts to each context. This game creates a link between both parts, some rare kind of intimate relationship in public space, that develops through time and that gives both the possibility to build a subjective perception of the environment different to the one imposed by society.

Most street art, both from the eighties and from the current scene, follows said formula, taken directly from graffiti, and which graffiti, in turn, borrowed from advertising: projects based on the repetition of some recognisable graphic identity, composed of a series of linked pieces that only take on their full meaning when the series is considered as a whole. In contrast, a small number of pieces in the street art scene do away with the use of any identity and take the form of anonymous interventions based mainly on the particularities of a given context, as is the case with most works by Brad Downey o SpY.

This identity-and-repetition formula has roots in advertising, graphic design and forms of popular culture such as punk, skate or subvertising, but most of all, it can be considered a descendant of the unstoppable cultural current of graffiti, a form of graffiti suitable for the general public. However, the lineage of this type of art is as old as that of graffiti itself. In the summer of 1968, as Julio 204 was starting modern graffiti in New York, a wholly mature experiment based on the repetition of an identity emerged in Paris.

Daniel Buren (1938) was in 1966 a painter who, after having progressively minimised his vocabulary for some years, was producing canvases using solely the traditional bicolour fabric of French awnings. Since then, his greatly successful career has consisted of the repetition of the vertical stripe motif.

The start of his popularity came out of his street activities, for which he abandoned the traditional fabric to use printed paper instead, retaining the vertical position and original width of the stripes, 8.7 cm. In March 1968 he started taking his personal icon to public spaces: first on the backs of human billboards, and immediately next in the first illegal installations on street-level advertising frames, actions the artist refers to as auffichages sauvages (wild postings).

In 1969 he called attention to himself when, after having his participation turned down in the collective exhibition When Attitudes Become Form in Bern, Switzerland, he carried out a series of installations around the exhibition venue. Since that moment and for several years he used his stripes, that he calls his outil visuel (visual tool), as an icon in a campaign he took as far as New York and Tokyo. His website features some other series from these years, for example You are invited to read this as a guide to what can be seen – Affichages sauvages (1970),  Cinq Travaux dans Paris – Affichages sauvages (1971) or the Affichages sauvages for the 10th Tokyo Biennale (1970).

Like many artists of the present decade, his illegal work in some cities took place as a consequence or even as part of his participation in some artistic events in those places. This way, legal and illegal activities benefit from a mutual feedback in a strategy used quite often in today’s scene: the legal part pays for the trip – and for any potential fine – while the illegal part serves as promotion. A system that could be called plain and simple guerrilla advertising. This fluent way of matching the legal and illegal sides of his work, together with an international vocation and the use of printed copies, makes Buren’s street art appear incredibly contemporary.

Yet, Buren is not the first historical case of this kind of street art. Another Frenchman, Gérard Zlotykamien (1949), began experimenting with human silhouettes in 1963, and wouldn’t stop using them until 40 years later. Neither were Julio 204’s followers the first to write a name all over a city, there were similar cases as far back as 1959 in Philadelphia. Graffiti and street art are not, in fact, father and son. They are actually brothers, both born during the turbulent sixties as a response to the corporate monologue of the society of the spectacle.