Based on an analytical approach to Eltono’s street work, this text puts forward a series of reflections about the different natures of graffiti and street art, about the way each of them relates to its context, and about the facets peculiar to the aesthetic experience of the viewer of these forms of art.

Some years ago, as I was walking down a steep, narrow street in the centre of Madrid, I saw some people angrily scratching a poster off the wall. They were two men, carrying painting tools. As I approached, they were walking away from the poster, cursing its author. Standing in front of the wall, I couldn’t help but laugh: one of the small posters from Eltono’s series Pinto Gratis (I paint for free) had proved too convincing for the annoyed painters, who are probably still wondering how people manage to offer such competitive deals. 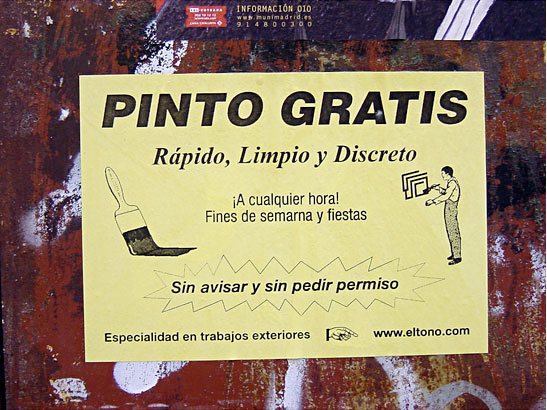 Pinto gratis is not representative of Eltono’s production. It was a counterpoint to his main body of work, the small, contextual paintings he is famous for. It shares with them, of course, that which is the central value in all of the artist’s work: lucid observation, and sensitive adaptation to the context. His paintings came about as a response to the streets of Madrid, a space saturated with conventional graffiti. In order to be visible amid the cacophony, Eltono abandoned letters in favour of a simple and recognisable image, and discarded the organic forms of freehand aerosol in favour of a repertoire based on the right angle and the absence of gesture.

The gestures of a graffiti tag, calligraphied with aerosol at the height of the torso, sometimes resemble the traces of a choreography similar to that of physical violence. Even more so in a city like Madrid, long characterised by an extremely hasty and sloppy style of graffiti. From this point of view, Eltono’s paintings are a kind of anti-tag, like Dan Witz’s hummingbirds were 30 years ago. Traces of a slow, even contemplative choreography in front of the wall.

If Eltono’s contextual paintings are unique, it is because they are defined against all other messages: unlike a tag, they lack gesture. Unlike a copied poster, they are improvised in a dialogue with the context, a quality they share with tags. Unlike advertising, or figurative street art, they don’t impose a message. And unlike advertising and most street art, they don’t obliterate the surface, but instead point to it and integrate within.

This interplay between form and counter-form is a crucial quality here. The balanced relation between the two arises naturally from the material used, paper tape, which is also the origin of the language of right angles. These are signs of a work process that develops with the material – as opposed to against it, a process that is open for the material to suggest approaches. This same attitude is the one that stops and listens to what the wall has to say, and gives it voice through the interweaving of form and counter-form. It is the attitude of the most congruous urban art, and often of the most fruitful: to work with what is there.

The street work developed in the 1960s by French artist Daniel Buren answered many of the questions around street art.

The street work developed in the 1960s by French artist Daniel Buren answered many of the questions around street art. His markedly conceptual approach was based on the insertion of a simple, meaningless and consistent element in the middle of the jungle of signifiers of the urban environment. For Buren, the simpler the outil visuel (visual tool), the greater its ability to project our consciousness on the context surrounding it, and on the semantic feedback that erupts between tool and context. Eltono’s paintings seem to benefit from this approach without having to sacrifice the more pedestrian formal play, the paint-stained hands, the sensual relationship with the environment. They unite qualities of idea and deed.

There is a tendency to think that graffiti is blind towards the environment in which it appears, because its only intention is to monopolise visibility. Correspondingly, there is a tendency to think that artists such as Eltono operate in a completely different sphere. This is, however, a myth. The works of graffiti, even a humble tag, are often also the result of a careful observation of the environment.

Of course, the illegality involves the need to carefully evaluate the particular moment, all entrance and exit routes, and to weigh up visibility, durability and risk in every occasion. But there is also a subtle play in the formal part: well-executed graffiti captures the attention by contrasting with the support. It doesn’t allow the support to dictate its shape: on the contrary, it stretches nonchalantly over adjacent surfaces. It works as a counterpoint, transversally attaching itself to the succession of surfaces, impassibly flowing over one surface and the next, benefiting from the absence of friction the aerosol provides. A game with as much room for nuance in the expressive relation with the environment as the richest language of urban art may have. Eltono has replaced the will to impose by means of contrast with the will to highlight by means of integration. But even with opposite goals, the sensitivity involved is close. We know that it is the experience of graffiti that has trained Eltono’s vision.

While this game of adaptation certainly has a lot to offer, the true aesthetic experience of street art, like that of graffiti, does not come from the contemplation of a particular work. It appears when the encounters with works recur in space and time, and the viewer begins to look forward to the next encounter, to speak the artist’s language, to feel engaged with the artist, as well as with the rest of the pedestrians who have allowed themselves to stop and watch, and have entered into the game. This entering opens the consciousness to a new stratum of reality and, by extension, to many others, an opening that facilitates the construction of a subjective environment different to the one imposed by the spectacle of capital. All of this, embedded in everyday experience, far from the hierarchical thresholds of art spaces.

It is also in the temporal dimension where another key aspect for Eltono emerges: the physical life of the work, abandoned in the street, its appearance changing until it eventually disappears, by cause of factors the artist cannot foresee. Most of his work for art galleries has been based on the idea of reproducing this principle in more or less controlled conditions. Highly risky experiments sometimes, as I can testify. The imponderables of independent work on the street make it impossible to offer the guarantees of quality on time required by art spaces.

A favourite of street art media since they came into existence, Eltono could have rushed into producing collectible artworks. His career in both the street and galleries however, is an example of a certain ethic of sustained work, oblivious to everything, which creates its own parameters and builds its own audience. This is an artist profile characteristic of Madrid, that appears from time to time in the city since the pioneer Muelle created the model in the eighties.

Corrected version of the article by the same title originally published in Eltono’s monograph Line and Surface (2011). Image courtesy of the artist.