The writing of slogans on walls, both freehand and with the help of stencils, has been part of punk culture since its inception. Influential bands such as Crass made it a part of their identity. It is also common in punk culture to write bands’ names, or the name of the writer. This last custom gave way in several cities to graffiti scenes wholly independent from the New York culture.

Shepard Fairey, author of the Obey Giant campaign and one of the big stars of street art, has often said that his education didn’t revolve around graffiti, but around skate and punk. When in 1989 he produced the sticker that was to be the germ of all his subsequent work, Fairey had had little contact with graffiti.

His original work derived from his involvement in punk and skate cultures. Both cultures revolve, or did so originally at least, around DIY philosophy. The home-brewed media of the early Fairey – stickers and stencils – are part of these cultures. The stencil, an ancient technique connected to the army and to industry as much as to propaganda and folk art, came to punk as a legacy of the Parisian movements of 1968, which had used it profusely to spread political messages in public space. 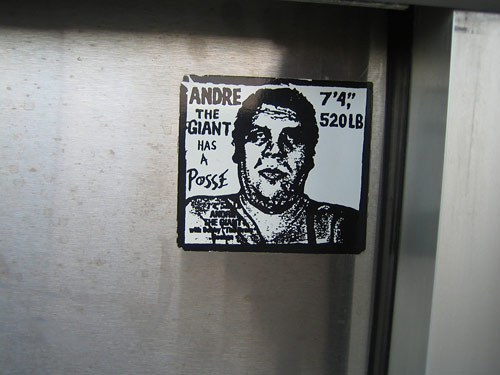 One of the original stickers by Shepard Fairey. Image by Noah Susman published under this liscense.

Street art researcher Tristan Manco wrote that “stencils have a long association with rebellion and punk. The punk movement used stencils because they fitted the general DIY philosophy.” Stencil is, indeed, the outdoor communication technique that is closest to DIY. It lets a person disseminate his idea with the minimum resources. Manco thinks the adoption of the stencil worked also as a “reference to utilitarian and military style, which punk appropriated to subvert symbols of authority.”1

Punks use the stencil mostly as a tool to disseminate political messages. However, the arrival of the stencil to punk culture was also linked to the dissemination of the identities of music bands. The British band Crass, formed in 1977, was apparently the first to use stencils in punk culture. Its members, closely involved in social struggles, are also considered the introducers of anarchist philosophy in punk.

The members of Crass said: “Since early ’77 we had been involved in maintaining a graffiti war throughout Central London. Our stencilled messages, anything from ‘Fight War Not Wars’ to ‘Stuff Your Sexist Shit’, were the first of their kind to appear in the UK and inspired a whole movement.”2

The link between the band and their stencil production became so strong that the title of their second album was Stations of the Crass, referring to their actions in the London underground, the group’s favourite place for intervention. The cover image shows several of their distinctive stencils, that they kept on using well into the eighties. 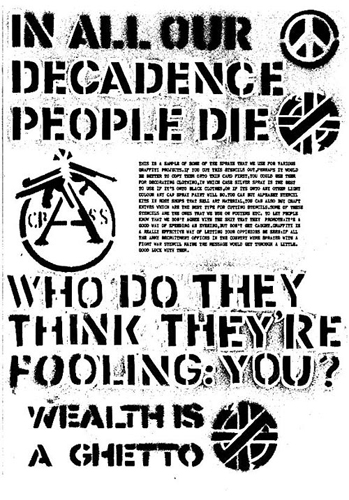 Crass used stencilling to disseminate political slogans, but also to disseminate the band’s logo, which became one of the icons of punk. These photographs taken in 1977 at the lavatory of the CBGB club show, among many other inscriptions, the band’s logo. The Tom Robinson Band, a British band formed in 1976 and as militant as Crass, was likewise known for using stencils to propagate their logo, a raised fist drawn from socialist iconography. The British edition of their 1978 debut album included a stencil of the band’s logo

Apart from their musical activity, Crass, as well as The Tom Robinson Band, operated as activist collectives. Propagating their identity was, therefore, equivalent to propagating the identity of a political party or labour union, something natural in the tradition of political graffiti. Therefore, the transition by which the dissemination of political slogans became the dissemination of the identity of music bands happened naturally, and within particularly militant bands.

The habit of mixing political messages with bands’ names on walls soon became a part of punk culture. From this custom came the habit of writing one’s nickname, something that, in punk, functions as another exercise in public demonstration of rebelliousness and affirmation of individuality.

This practice has never been an essential component of punk, and nowadays the vehemence of graffiti in the New York tradition – the one usually linked with hip hop – has obliterated it almost completely. However, several references lead us to assume it had a presence in many places, particularly at the start of the eighties. The influential graffiti writer and artist Barry McGee tells how he came across the idea of graffiti about that time through the San Francisco punk scene.

It was a lot of punk rock shows and stuff like that. There was always graffiti in these places and I was just like, ‘Who is this guy? I keep on seeing this guy.’ There was this one guy, Cuba, he wrote ‘Cuba’ and it was at all the same hardcore shows in the bathroom, on the door, and on the street.3

In two places in the world at least, Amsterdam and particularly Madrid, the habit expanded until it gave way to actual graffiti scenes, already independent from punk culture, formed by writers focused on the competition for getting up more than the rest. Both scenes developed before the New York graffiti tradition took root with European youth. They were indigenous traditions that produced specific customs and codes, different from those of New York graffiti, although sharing with it the main premise: multiplying the presence of the name.

Both cultures disappeared with the generalisation of New York graffiti. In the case of Amsterdam, this transition took place before the local culture had time to be fully defined. In Madrid, the culture of autóctono (indigenous) or flechero (arrowed) graffiti was isolated longer, because of the cultural inertia of the post-Franco era. Thanks to that, the originator and leader of the current, the legendary Muelle, had time for his particular graphic language to mature, a language that the whole scene adopted, giving way to one of the rare graffiti cultures independent from the New York tradition that have reached some degree of complexity. 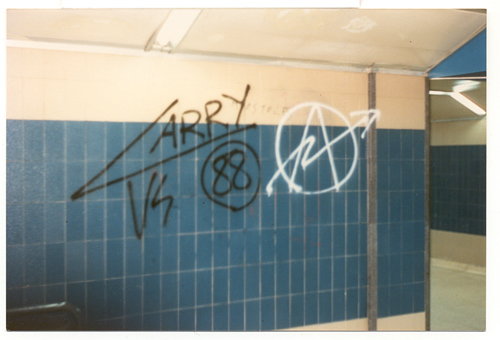 Larry 88 VS, one of the most active writers of the indigenous Madrilenian scene. Image courtesy of Einsamkeit.

There exists very little information about these scenes. Only the excellent documentary Kroonjuwelen, a study of the history of Amsterdam graffiti, features some invaluable footage from the late seventies. The Madrid scene has only been studied at some depth in the book Madrid Graffiti (2002), out of print for a long time now. The following images, courtesy of Einsamkeit, show tags executed on subway advertisements in Madrid that were cut-out and archived around 1989. 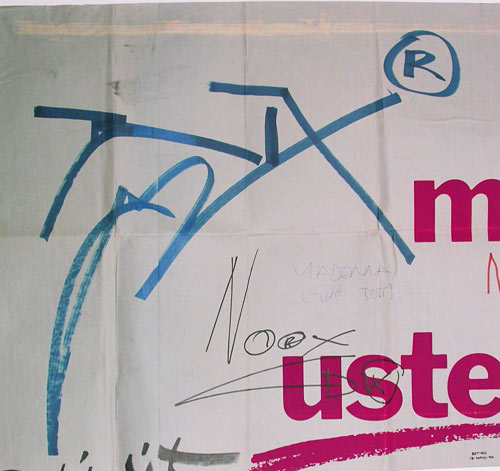 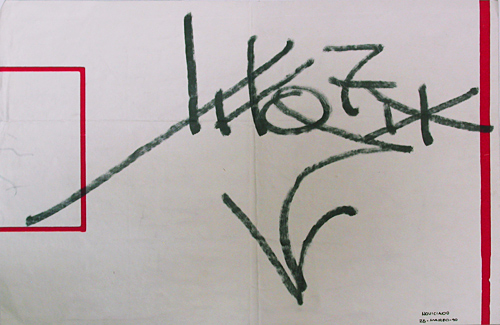 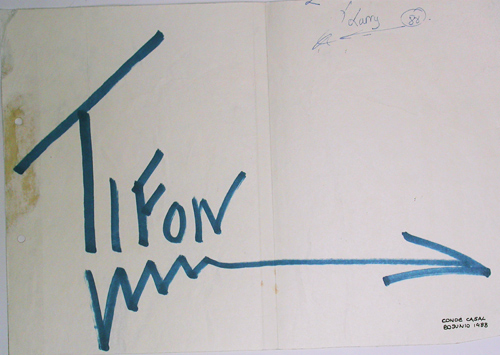 2. Crass: “…in Which Crass Voluntarily Blow Their Own”. Text included in the album Best Before, Crass Records, 1986.