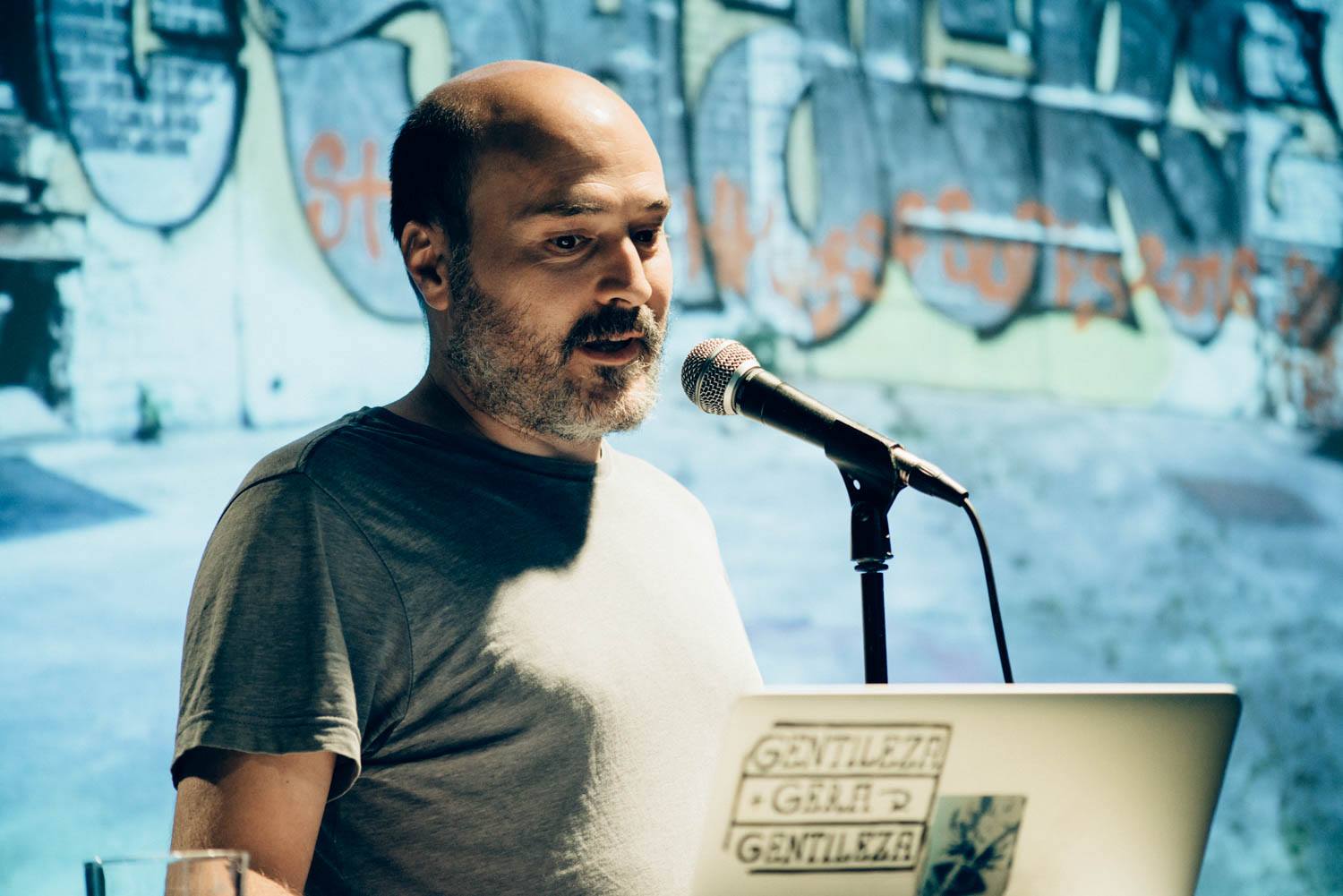 Javier Abarca (Madrid 1973) is one of the leading thinkers in the field of graffiti and street art. A key artist in the first generation of Spanish graffiti, he taught a pioneering 4-month course on these topics at the Complutense University of Madrid between 2006 and 2015. He works internationally as an educator, researcher and author.

After teaching widely for 15 years, Abarca founded the Urbanario School, an online academy for advanced education about graffiti, street art and related topics. Since 2008 he has run the website Urbanario, the essential source for graffiti and street art research in the Spanish language. He is also the founder and director of the groundbreaking events Unlock Book Fair and Tag Conference. Detailed CV at javierabarca.es/en/bio.

In the late 80’s Abarca took part in the punk-originated, vernacular graffiti scene of the Madrilenian ‘flecheros’. By the start of the 90’s he was leading the flourishing local subway graffiti scene, and networking throughout Europe in the first Interrail forays by Spanish writers. He has been a privileged witness of the international street art scene since its budding stage in the 90’s, and a close accomplice of key artists.

Abarca’s early academic work laid the foundations of the field of graffiti and street art research in the Spanish language. His milestone PhD is regularly quoted in papers on these topics, its PDF version has been downloaded over 20.000 times from the online repository of the Complutense University of Madrid.

In 2006, at 32 years old, Abarca was commissioned to design and teach a 4-month class about graffiti and street art for the Complutense University of Madrid. It was the first of its kind, and the only one for years. Its program included private Spanish premieres of milestone documentaries, unpublished artist videos, and visits of key local artists. Half of the teaching time was devoted to one-to-one mentoring sessions in which the students developed site-specific outdoor intervention projects, see selection here.

After a continuous decade of teaching that class, Abarca left his position to focus on his own projects. He has stayed an influential presence in the specialised academic field, and his conceptual contributions have become turning points in the European discourse. He talks regularly at specialised events, and was founding member of the scientific committees of the pioneering Urban Creativity Conference (Lisbon), SAUC Journal (Lisbon), Nuart Journal (Norway) and Menetekel.org (Berlin).

He is the founder and director of two groundbreaking and central events in the international research scene. The Unlock Book Fair (started in 2016), the unmissable meeting and showcase of the specialised publishing scene, and the Tag Conference (started in 2017), an event where academic and independent researchers share their findings about tagging of all eras.

The Unlock Book Fair and the Tag Conference are travelling events. They have taken place in Barcelona, Berlin, Amsterdam, Cologne, Modena, Herne (Germany), Besançon (France) and Groningen (The Netherlands). Offshot events have traveled to sixteen cities in Europe and America, among them Moscow, London, Lisbon, Vienna, Manchester, Kassel, Madrid, Monterrey and Mexico City.

Abarca is also the editor and publisher of unprecedented books about obscure chapters of graffiti and street art history, such as hobo graffiti from the late 19th and early 20th centuries, and the punk-originated European graffiti scenes of the 70’s and 80’s.

In his forays into curatorship Abarca has worked with some of the most forward-thinking artists in the scene, among them Eltono, MOMO, Escif, Adam, Akay, Wermke–Leinkauf and Mathieu Tremblin. In 2012 he co-curated Eltono’s “Deambular”, the first solo exhibition in a Spanish museum by an artist coming from the street art scene. He has been commissioned to design and present seminars, roundtables and screening sessions by various institutions.

Through his 15 years of teaching experience Abarca has worked in courses, workshops, lectures and mentoring with hundreds of students from all backgrounds, by commission of universities, museums, institutions and independent spaces. Among them:

Abarca lectures and teaches frequently in the street art festival circuit as well. He has been guest keynote at meetings of festival producers to provide critical readings of the field. He is a regular contributor and consultant at the leading event Bien Urbain (France), has worked in projects as old and influential as Nuart (Norway) and Backjumps (Berlin), and in other festivals in Mexico, Scotland, Germany, Belgium, Austria, Czech Republic, Slovakia, Rumania, Estonia, Portugal, Italy and Spain.

After repeated requests for teaching abroad, Abarca founded the Urbanario School to cater to the growing interest in well-fundamented analytical looks into graffiti and street art among students, academics, professionals and enthusiasts.

Rafael Schacter (UK)Professor, critic and curator | University College London
Read More
Javier Abarca is an inspirational thinker, theorist, and teacher. He understands graffiti from the position both of a practitioner embedded in the subculture, and of an educator able to translate this visual and cultural world into the space of the classroom and the street. Javier’s teaching and mentoring will benefit all those who he comes into contact with; artists, students, and art professionals alike.
Pedro Soares (PT)Professor | Founder and director, Lisbon Street Art and Urban Creativity Conference | Universidade de Lisboa
Read More
With an intense and thought-provoking character, Javier Abarca is guarantee of the sharpest and more unconstrained thoughts about graffiti. This free-thinker is simultaneously a pioneer of the most underground side of graffiti and the author of the first Spanish-language PhD-level thesis about graffiti and street art
Pietro Rivasi (IT)Critic and curator | Creator of Icone Festival, founded in 2002
Read More
Javier Abarca is the kind of researcher graffiti culture needs: he has a strong background in the scene, curiosity and an extraordinary storytelling capacity. An impressive, top-level divulgator.
Carlo McCormick (US)Author, critic and curator
Read More
With his head in the rigors of academia and his feet on the streets, Javier Abarca is one of the most compelling and erudite guides to urban aesthetic and practice out there. His intelligence and remarkable understanding are secondary only to the exceptional generosity by which he shares his great learning with others.
Robert Kaltenhäuser (DE)Critic and curator | Museum für Visuelle Dissidenz
Read More
In addition to his virtually unparalleled achievements for independent research and networking in the field of Urban Art, Javier Abarca has been one of the standout forward thinking curators and critics in and on the genre ever since he raised his substantive voice.
Lachlan Macdowall (AU)Professor and author | University of Melbourne | Director, MIECAT Institute | Author of «Instafame, Graffiti and Street Art in the Instagram Era»
Read More
Javier Abarca is one the foremost scholars of graffiti, street art and urban creativity. As a practitioner, theorist, author, publisher and adventurer, Javier brings decades of experience, an encyclopaedic knowledge of urban creativity in all its forms and a restless curiosity to his craft.
Richard Brook (UK)Professor and author | Manchester School of Architecture, Art and Design
Read More
Javier Abarca is one of the world's leading thinkers on graffiti and art in the urban environment. He has tirelessly promoted critical approaches that help to understand the value and values of ephemeral art movements of the late twentieth and early twenty-first centuries. His work is crucial in discourses around public space, spatial justice and rights to the city.
David Demougeot (FR)Director, Bien Urbain festival
Read More
For many years Javier Abarca has studied independent public art as a complex subject, dealing with topics such as art history, societal changes, underground cultures and media dissemination. Avoiding clichés and snobbery, he manages to deliver his precise and relevant thoughts in a fluent and reachable way, naming the issues as no one else.
Dumar NovYork (US)Author of «What do One Million JA Tags Signify?»
Read More
Javier Abarca has proven himself to be a leading expert in the field of Graffiti Studies as well as a detail-oriented producer of graffiti related events. His Unlock Book Fair is a pioneering happening which always brings fascinating perspectives and avant-garde approaches to interpreting the writing on the wall.
Andrea Caputo (IT)Publisher and architect | Editor of «All City Writers»
Read More
Javier Abarca has not just witnessed the Graffiti Writing movement as one of the pioneers of the Spanish and Madrilenian scenes. Through the past decades, he has built a long-time investigation on the development of Graffiti Writing style, techniques and behaviors though countless international contributions.
Ulrich Blanché (DE)Professor and author | University of Heildelberg | Author of «Banksy, Urban Art in a Material World»
Read More
Javier Abarca is one of the most important graffiti and street art researchers worldwide. His groundbreaking texts on topics such as the punk side of graffiti, Brazil stencil pioneer Alex Vallauri, or the significance of the human scale in illegal street art, have been especially important for my own research.
Peter Bengtsen (DK)Lund University | Author of «The Street Art World»
Read More

As the person behind the Unlock Book Fair and the Tag Conference, Javier Abarca is a central figure in the community of researchers focused on graffiti and street art.

He has a long history of thinking and writing about these topics and, crucially, emphasizes the importance of paying attention to not just centrally-placed and flashy graffiti pieces and large-scale murals, but also to out-of-the-way and less conspicuous interventions.

Ilaria Hoppe (DE)Professor | Institute of Contemporary Arts and Media, Katholische Privat-Universität Linz
Read More
Javier Abarca is one of the most interesting graffiti researchers worldwide. On the one hand, his extensive knowledge comes directly from the street, as he is one of the pioneers of the writing scene in Spain; on the other hand, he looks back on many years of research and teaching within academia. He also initiated the Tag Conference and the Unlock Book Fair, which have become important events of critical graffiti research at the interface between subculture and scholarship.